Third parties place cookies on this site. This is beyond my control. Please be aware.
Posted by Carol Widing at 5:26 PM No comments:


The Rock of Gibraltar. Come upon it while driving around the southern, Mediterranean coast of Spain, find checkpoints and be reminded that this is a British area, since the 1715 Treaty of Utrecht. 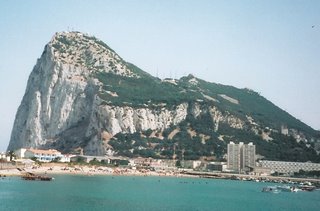 Why does it remain British? Even if those on Gibraltar over 300 years may want to be realigned with Spain, just over the causeway; or remain British, is there a future to an independent, autonomous Gibraltar?

Gibraltar offers not only political conundrums, conundra, but also tailless apes that come close, very close, looking for food.  Do not feed. That disrupts their social organization, say all the signs.  We did not feed. They came close to us, nonetheless. 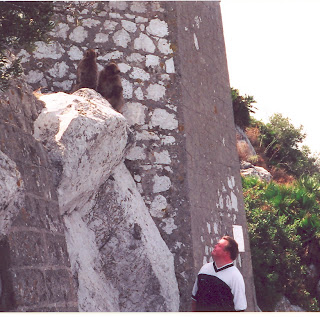 Dan Widing, with care, on Gibraltar, with tailless ape


Self-contained, these fellows are accustomed to people. Still, do not pet. Do not feed

Enjoy the view across the water to Spain (a causeway connects) and and below to the speedy yacht.  This is very high up. Arrive by tram car suspended and from far below. 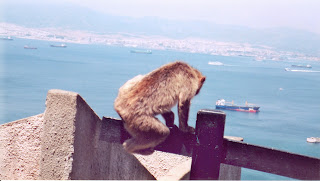 Gibraltar. Ape, enough of socializing, leaves.  Note: the no tail.

This place reflects the changing interests of people in places tossed by history from one demographic-cultural association to another. Others include Trieste, Hebrides, Orkney,and war boundary changes most anywhere.  Give special consideration in human rights. When do old treaties, wars, isolations, incorporations, lose their relevance.

The British used to say that they would remain in Gibraltar so long as there are tailless apes there.  So the apes are well cared for.  The problem is tourists --  feeding them, disrupting their social structure, digestive systems, autonomy by making some dependent.
Posted by Carol Widing at 4:58 PM No comments:


1.  Alameda Botanic Gardens:  Find Molly Bloom, wife of Leopold, as in James Joyce's Ulysses.  She is a major's daughter, raised on Gibraltar, famous for her soliloquy about Much in the novel. The time period is early 20th Century.

Look up James Joyce's Ulysses, at the Penelope episode (Penelope as the wife of the wandering Ulysses himself), at  http://ksumail.kennesaw.edu/~mglosup/ulysses/penelope.htm.  In the book, turn to pages 738-783.  Download it as part of the Gutenberg series at http://www.gutenberg.org/ebooks/4300

There is a wonderful statue that we missed, but we all can see at the Gardens at http://www.flickr.com/photos/chiri_dr/188665328/

2.  Espionage, Spy Spot:  Find pseudonym Paul, present at a scene intended to be an extraordinary rendition, with roles by Whitehall and its British intelligence service, Blackwater-types involved as private companies, whistle-blowing and its consequences (expulsions and even death), medals to coax otherwise risky counter-source sources to cooperate and shut up, and all by author John Le Carre, in A Delicate Truth.  See review by James Srodes, Washington Times, at http://www.washingtontimes.com/news/2013/jul/19/book-review-a-delicate-truth/

The time period is Now.

Despite strong support of the population to remain British, the people there are heterogeneous, see http://www.gibraltar.gi/history/.  In 1704, the War of Spanish Succession came to the Rock, with an English-Dutch expeditionary force prevailing.  The some 4,000 Spaniards left.  Immigrants entered -- including from Malta, Genoa, Portugal, some Jewish, and both Catholics and Protestants. In 1713, Treaty of Utrecht, Spain ceded Gibraltar to Britain.  The British who followed seem to have been merchants, or persons providing services to the military.  Early on, population-representation was limited, and courts administered by the military.

Spain has frequently used border restrictions to make its points in seeking reversion of the land to Spain, see gibraltar site above.

Posted by Carol Widing at 11:25 AM No comments: 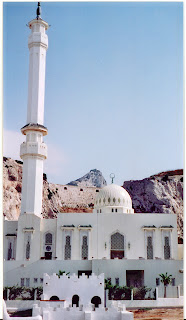 See the famous rock in the background. Hear the call to prayer, http://www.youtube.com/watch?v=XiTRoO-SP_Y;
and the link to a video of the interior at http://www.youtube.com/watch?v=qgfta2j4dIw/.  This is not an ancient mosque, however, despite the long history of migrations, invasions, peoples crossing from the North of Africa to the Iberian Peninsula.  This is new, and part of a complex, see http://www.visitgibraltar.gi/mosque

Gibraltar in the news, with the construction of reefs strategically by the Gibraltans, and opposed by Spain.  See http://www.telegraph.co.uk/news/worldnews/europe/spain/10238830/Spain-stands-by-Gibraltar-controls-despite-UK-legal-move.html.  How to put that issue in perspective? Why is it so important? See the role of reefs, docking, in a commercial video, for Gibraltar.   Spain's opposition?  It wants a reversion of Gibraltar to its territory.  Other reasons?

Gibraltar is one of the ancient Pillars of Hercules, and any long-form presentation seeks to provide good sites for further looks, see here http://www.princeton.edu/~achaney/tmve/wiki100k/docs/Pillars_of_Hercules.html; but for an idea of the role of reefs, and docking space, see a touristy video at http://www.youtube.com/watch?v=HdFoV_hon7U .

For a fast visit, as ours, with a single overnight and two full days (arrive early AM, leave late PM next day), photographs are not a priority.  So, videos..
Posted by Carol Widing at 5:55 PM No comments:

Gibraltar Tercentenary. Gibraltar Pushes Autonomy. Is that so?

Territories Seeking Autonomy.
What of Gibraltar; and Spain; and Britain.
Who decides after 300 years?

Spain is not happy.  In 1713, the Treaty of Utrecht that was designed to resolve bloody issues of who should succeed to the Spanish throne, awarded Gibraltar to the British Crown forever.  Forever?  Forever. Yet, the treaty is disregarded in many ways, that reflect democracy's rise since 1713.  Jews and Muslims were forbidden to settle there, according to the old Treaty, but that is happily ignored. Cannon and bloodshed produced the Treaty, according to the Financial Times, July 14, 2013, at p.4. That quotes Fabian Picardo, chief minister (what is that?) of Gibraltar.
See Financial Times, World News, No flags are flying for Gibraltar's tercentenary, July 14, 2013 at 2.

So here we are at the 300th anniversary, and nothing celebratory is happening. Gibraltar remains economically solid, self-governing, but Spain says, not so fast.  Stop your reef-building. In essence, this is an old colonial holdfast, and it is time for Gibraltar to revert to Spain and stop its ongoing entrenching.To underscore the point, Spain is increasing the hurdles at customs, for crossing borders.

Territorial integrity:  Other nations have resolved these in form, as in the Hebrides, Orkney, Trieste, by incorporating those areas into the nations who won them by cannon and bloodshed.  Those, however, had boundaries that touched the rewarded nation, or those boundaries were changed to make that a reality. Such is war.

Who rules Gibraltar?  The Gibraltar Socialist party,  Albert Isola is a member, and financial services minister.  As tourists, it is easy to forget the real world of the people who live there.

And:  news flash. Gibraltar appled for its football (read, soccer) team to achieve status as a full member of the European football association.  The Spanish federation was enraged.  So, Gibraltar, as of now, can compete in international tournaments.  Who else has this status?  Andorra, San Marino (where?), and the Faroe Islands (is that where farro grain comes from?).

So Spain upped the ante by objecting to Gibraltar's joining the European Rugby Association.

Spain will not acknowledge Gibraltar as a negotiating partner.  Gibraltar says:  Spain has no sovereignty over us, and won't.  Gibraltar is doing well economically.  Spain is not.

So, in acknowledgement that sovereignties change, we move our older Gibraltar posts, included in Spain because we went to Gibraltar as part of a two-week improvised road trip to Spain, to its own site.